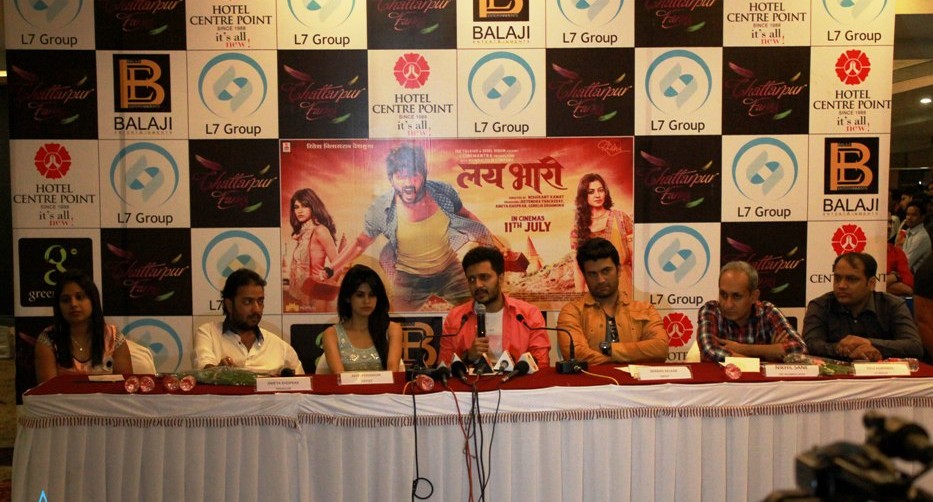 Tue. July 15th 2014. L7 Group is a multi-dimensional company with its stake in diversified fields. L7 Entertainment Pvt. Ltd. is the media and entertainment wing of the group that is always busy in catering to the entertainment demands of the audience. In tune with its quest for bringing in the best and the most prominent celebs to the city, much recently, L7 Entertainment was seen hosting the press conference for the much-talked Riteish Deshmukh starrer Marathi movie Lai Bhari. Riteish has received great appreciation for his negative role in the recently released movie ‘Ek Villain’.

With this movie, Riteish is going to make his debut as an actor in the Marathi films. Although he has produced a couple of Marathi movies before that went on to win several highly acclaimed awards, this is for the first time, he is trying out his acting prowess in Marathi movie and that is why the occasion was certainly very special to him.

In such circumstances, right introduction and media representation is highly significant. And for this, Riteish trusted the able management of the L7 Entertainment team. This speaks volumes about the specialty of the company and emphasizes the fact that the company can successfully host such press conferences and many programs that are more similar.

Directed by Nishikant Kamat, the movie also stars small screen star Sharad Kelkar and Marathi actor Aditi Pohane. While Sharad is playing the lead villain in the film, Aditi is the leading lady. Both were present at the promotional press conference alongside their director and Riteish that was held at Nagpur’s Center Point Hotel. The film hit the screen on July 11.

Also sharing the dais during the press conference was the esteemed chairman of L7 Group Ravi Agrawal and Sanjay Kukreja of Balaji Entertainments. Riteish was elated to be in Nagpur city and appeared open and friendly with the media. He stressed on the importance of Marathi Cinema, its uniqueness and also detailed the audience about his role in the movie.

City scribes also directed volley of questions at the two other stars present-Sharad Kelkar and Aditi Pohane who answered them pretty well. Sharad said that acting in a Marathi flick was an incredible experience for him. When asked about the guest appearance of superstar Salman Khan in Lai Bhari, Riteish said that no persuasion was needed to make the star work in a Marathi flick, as he himself was more than willing to be a part of it. This once again stressed the importance of Marathi Cinema.

Also present on the occasion was Jeetendra Thackeray the chief of Cine Mantra Entertainment and also the producer of the film. He stated that in this film, Riteish is playing the role similar to modern day Robin Hood and the whole film has been produced with eyes on the box office.

L7 Entertainment regularly hosts such press conferences and media programs and is a pioneer in bringing stalwarts to the city and keeping the media circle of Nagpur constantly buzzing.